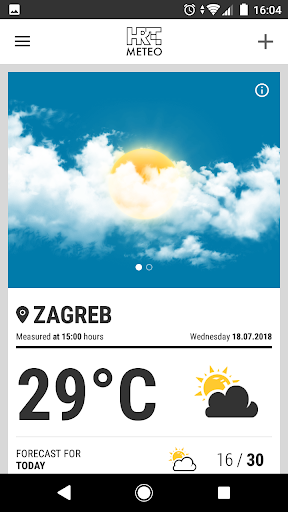 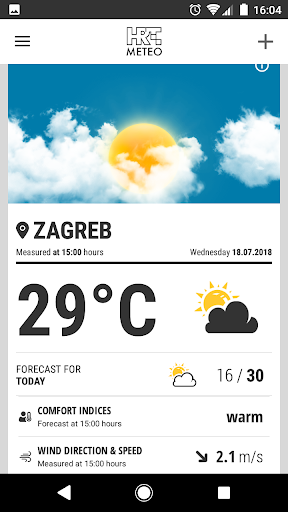 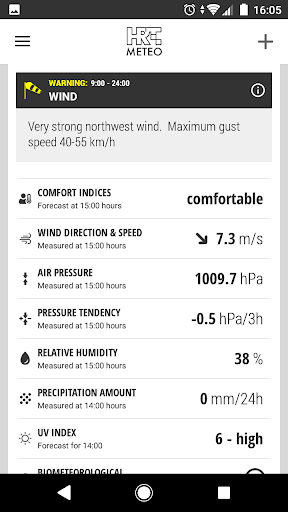 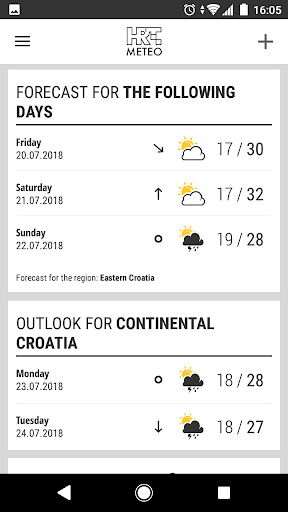 A unique application that enables the monitoring of measurements and observations from the official meteorological stations of the National Meteorological and Hydrological Service of Croatia (DHMZ), as well as most other European meteorological services, according to World Meteorological Organization standards. The application also provides radar precipitation images and prognoses of DHMZ experts, which until now were only available on Croatian radio and television programs, as well as Croatian Auto Club (HAK) traffic information, including live video streaming from most Croatian regions.

Unlike virtually all other similar applications, where prognoses are the result of a computer calculated numerical weather forecast of one atmospheric model, HRT METEO’s experienced and highly educated meteorologists make their prognoses on the basis of an analysis of current weather conditions and hundreds of calculations for various atmospheric models, providing their forecast of future atmospheric conditions and conditions at sea for regions and urban areas. They also provide severe weather warnings, which appear on the app within minutes of the meteorologist’s forecast for the DHMZ.

The latest radar precipitation images from the DHMZ.

HAK traffic reports, including the latest images from web cameras and advice for drivers.

Sunrise and sunset times for the sought after region or area on the basis of the NOAA algorithm.

The day of the previous and subsequent change in the lunar cycle.

Forecasts:
– pictogram and numbers for 55 urban areas in the Republic of Croatia for the current and subsequent day,
– pictogram and numbers for 44 cities throughout Europe, including 10 from Croatia’s neighbouring countries
– written forecast for 8 Croatian regions for the current and subsequent day, as well as pictogram and numbers for the following day and subsequent two days. The regions are: central, eastern and mountainous Croatia, the Istrian and Dalmatian hinterlands and the northern, central and southern Adriatic coast,
– the outlook for the following two days, separately for continental and coastal Croatia,
– a special written marine forecast for the Adriatic Sea, with an emphasis on winds, sea conditions and visibility
– a written forecast on the basis of an analysis of previous and current weather conditions and hundreds of calculations for various atmospheric models, which is prepared by an educated and seasoned meteorologist,
– pictorgram forecast presenting the general or predominant trend in the weather for the current day in one specific region or urban area,
– numerical forecast provides the daily temperature highs and lows for a specific place, and the predominant or significant high and low for a region
– biometeorological forecast for the region which the requested location in Croatia is found in
– comfort index for places in Croatia
– UV index forecast at 14:00 (13:00 in winter months) for the requested place in Croatia
– traffic forecasts provided by HAK experts
– video forecasts from HRT’s weather report

HRT in cooperation with DHMZ and HAK.
Small application improvements